I know, artisan beers are all the rage these days, & for good reason.  You can make beer anytime anywhere, it accepts a wide variety of flavorings, & it’s one of the most popular beverages in the world: only water & tea are consumed more often.  Beer is the people’s drink, the heart of pub culture, crafted & beloved by humanity everywhere.

There are a good number of us, however, who incline toward the fruit of the vine. Humans have been drinking intentionally fermented grape juice about as long as we’ve been tilling the soil – around 10,000 years.  Before that, I’ve no doubt that when our ancestors trekked out of Africa & happened upon 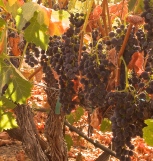 those ancient grapes oozing sugar on Near Eastern autumnal vines, returning to those vines became an annual migration ritual for the tribes.

My most favorite thing about wine is making it; right now it’s ‘crush’ season for winemakers everywhere.  We don’t crush grapes with our feet too often any more…although I do recall us resorting to that very key part of our anatomy a few years back when our human-powered destemmer/ crusher was too wimpy for some hardy local chardonnay grapes.

I also of course, now & then (more then than now…still in recuperation mode…) deeply enjoy my share of delectable sips of artfully fermented fruit juice.  There’s truly nothing more satisfying than sharing a bottle of good wine that you first tasted as a nubile grape & eventually hand-corked in the backyard of an oak-shaded garage ‘winery’ in the San Lorenzo Valley.

There are dozens of local wine co-ops in our area, each with it’s own volunteer Winemaker:  Mike is ours & he’s a marvel.  We’re not commercial wineries: while some grow their own grapes, most local wine-making co-ops purchase grapes from central coast as well as northern & central CA vineyards.  Our 35+ year old co-op usually pays cash for 1/2 ton+ of each grape varietal – enough for one barrel – & we make about 4 barrels of wine/year – roughly 100 cases which we share among the group with a cost of about $8/bottle.  (A few admittedly debatable favorites: Alexander Valley Cabernet, Carneros Tempranillo, Santa Cruz Mountains Pinot Noir, Arroyo Seco Viognier, & Mesa del Sol Syrah.)

Recently though, discord disturbed the tribe.  For a number of reasons (many of which I’m sure you can surmise), it was no longer appropriate to use our long-time co-op name, Ohlone.  To the generally younger &/or newer members of the group, this was kind-of a no-brainer…whatever, no problem.  But to some of the older, original members, it was tantamount to heresy.  It’s taken us the better part of a year to work through this, but after many meetings & email exchanges we have, and thankfully no one deserted the group because of it.  We don’t yet have a new name, but our perseverance has confirmed that what we all still love to do together is produce ‘a wine made among friends’.

This year, to my great disappointment, I’ve had to miss most of the crush season due to that icky illness.  But there are still two bins of fermenting grapes to press, & I plan to be there if only to hold the babies, chat with the little boys, & gossip with the elders.

Secretly, though, I’ll be there to inhale the seductive aroma of the future.