A Window that Opens

Am I the only one noticing all those old Volvo 850’s out there in the hood?  Nevermind they’ve got a few dents & peeling paint, & they’re not as sleek as the newer class of 21st century cars…like a favorite chair, my old 850 with the engine-that-never-dies has molded itself over the years to its companion driver.  It’s hard to let it go.

A broken air conditioner, broken odometer (years ago at 149K), disintegrating seats, & broken driver-side window have led to near-fatal 850 dysfunction.  & this was after repairing the broken-in-the-open-position sunroof.  It was time for a newer car – I’d held on as long as I could. 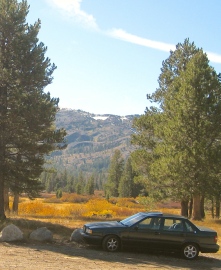 I know…its slightly embarrassing for a climate change freak to have such warm feelings for a funky, dusty old car.  That old 850 has been a part of our family since 2001…life was definitely different a decade ago.  We’ve been through a lot together.  I’ve even tenderly washed it myself recently – its deep teal blue really attracts that useless highway construction detritus.  & hey, I’ve noticed (have you too?) that I have old-car company out there!…at least here in our hometown of Santa Cruz.  Housing costs are so high that many of us need to skimp on transportation, & really, that’s OK – who needs a new car anyhow?  Some say it may be better greenwise to hang onto those old favorites until they really bite the dust…manufacturing a new car can rack up energy & GHG costs.

But the sealed window sealed the Volvo’s fate – we recently bought a 2009 Jetta TDI.  It gets great mileage & husband R can offer it without embarrassment for carpools on frequent out-of-town trips.  It’s a safe & sane & silver & all the mechanics work.  But, sigh, it just doesn’t have that comfy 850 feeling.

So I decided to get that old glove-of-a-car functional again (now that we’re not dependent on it for serious driving).  I decided, for now, that I can live with no odometer & no air conditioner, but even as a back up car, I can’t live without the wind in my face.  I decided to revive the 850 with a salvaged door from one of it’s permanently-off-road sisters.

A window that opens!  The lovely cooling effect of a breeze!  Maybe I’ll even invest in new seat covers.  I’ll resist fixing the air conditioner, at least until the inevitable accelerating global warming feedback loop shifts into high gear, & really, who needs an odomoter anyway?

These 850’s are going to be a classic some day – maybe as representative of a past way of life.  Maybe by then I’ll be ready to let that old car go…as a gift to the Museum of Past Extravagances.

For now, every once in a while, you’ll still see me 850 cruising…as long as that window keeps rolling up & down.

ps. did you see that full moon last night??  omg, love that sister orb of ours.

8 Responses to A Window that Opens