A while ago I noticed a slew of news articles about how much food is wasted…realizing that I’m part of the problem really hit me in the gut.  I now feel especially guilty about bread crusts – I’d always thought of those tossed bits of bread as a way to reduce my carb intake. 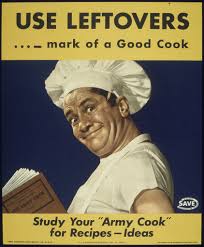 But then I remembered that I actually have been doing a bit to reduce food waste – I love having leftovers for breakfast.  I can’t claim to have initiated this habit in our household, although I’m the one to employ it more often now than originator R (he’s currently in a daily-bowl-of-steel-cut-oatmeal rut).  Of course, my favored breakfast can’t be just anything…some variety of leftovers just don’t cut it (say, spicy chili, or for that matter, anything too spicy).  Usually though, it’s truly exciting how good leftovers can be the morning after.  If you can throw them in the frying pan with an egg or add them to a slice of toast (with the crusts), all the better.

This breakfast probably wasn’t always as odd as it might seem – people during most of time, & most places around the world, ate & eat whatever’s on hand, & probably felt/feel fortunate to have it.  We’re so spoiled with our ubiquitous markets & ‘standard of living’ – not that it doesn’t come without a cost, but when it come to food & hunger, yes, we are spoiled.  Like all the food we waste.

Some estimates put global food waste & food loss at about 1/3 of total global food production.  This staggering statistic just overwhelms me – how can I possibly do anything about it?  Well, doing something with those leftovers is something.  Breakfast.  Refrigerator meals (I know this doesn’t sound very appetizing & it’s definitely not something to advertise when you bring it to potluck, but these are those often terrific – well, not always – concoctions made from random stuff in the fridge).  Composting (we have two bins but I haven’t gotten up the courage for worms yet – working on it!).

The freezer! – geez, how lucky are we to have freezers & refrigerators…2013 even happens to be the 100th anniversary of the domestic version.

Maybe I’ll even look into that worm composter one of these days.

8 Responses to Leftovers for Breakfast