Posted on August 9, 2012 by liveoaklinda

Have you noticed how the light has changed in the past few days?  & the new edge to the morning fog?  Technically we’re still in the middle of summer, but I always thought it a little odd that our calendar starts summer at the solstice in June…it seems unfair that the days just get shorter after that.  Not that I believe life is fair. 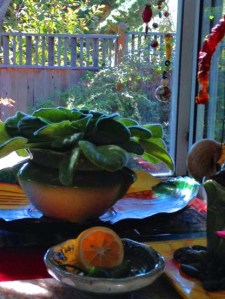 Though the window over the top of my computer screen I’m enjoying the scraggly sunflowers along the back fence, back-lit by the late afternoon sun.  In the kitchen, the half-lemon on the sill glows, next to my mother’s African violet (Saintpaulia ionantha)…sweet moments of appreciation.  I am alone here.  Soon I’ll have to adjust the blinds in order to keep writing, or maybe I’ll just get back to it later in the evening.  Or maybe not.

This is the first year I’ve planted sunflowers & I now know that you don’t pinch off the tips like you do with salvias.  Other than the (lovely-even-in-struggle) sunflowers, the back fence has been inhabited primarily by volunteers since we cut the douglas fir trees down a few years ago…too much sap on our backyard fire pit stools.  R was upset.  We still haven’t decided on a replacement tree. I actually love supporting whatever decides to grow there though (well, not everything…the oak & cherry sprouts get pulled, as do some of the ‘weeds’).  I like the randomness of it all.  Maybe we don’t need a new tree.

In this late afternoon kitchen light, I’m in the middle of concocting dinner for a family in transition.  Ergo, I will not be alone for long.  My older daughter Z & grandson D will again be here soon for the night, & probably for a few nights after that until a new home is found & moved into.  She & her partner have separated.  Sometimes this is necessary – so many people know this.  In the long run, hopefully a good decision.  In the short run, it feels extremely difficult & stressful for all of us; trying to help it feel least so for D.

I walked with another, new Linda this morning (there’re alot of us around & most commonly of a certain generation…) – happy to show her my favorite park & harbor route. Each of our daughters’ called along the way, but we both said, later, love you.

This entry was posted in Just an Everyday Life and tagged african violet, fall, light, Linda, separation. Bookmark the permalink.

4 Responses to A Kitchen Facing West