Burn3: Smoke in the Trees

Prickly burnt-orange redwood needles have been raining onto the back deck for a few weeks now.  I remember the first time this happened a couple of years after our move to Live Oak Avenue in the mid-80’s – it took a call to a trusted arborist to reassure me that the tree was only drying, not dying.  Now I know it’s truly a drought when I’m sweeping the deck every other day in August.

Two weeks ago there was a wildfire down the street in Schwan Lake [State] Park.  Lots of smoke & sirens – we’re lucky to live in an urban area with highly responsive (& highly paid) 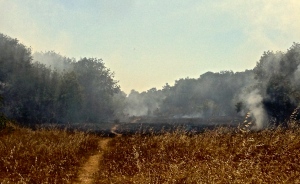 firefighters.  It ended up being just a small grass fire.  The trees, animals, & other folks near Yosemite aren’t as fortunate.

Wildfires are traumatic for humans & seriously damage animal habitats.  We’ve had some bad fires here in Santa Cruz County over the past few years.  The coast range is heavily forested, & includes large stands of non-native & less-than-beloved eucalyptus, which can pose extra fire danger.

There’s no disputing the wildfire risk of drought & the Big Warming.

On the other hand, wildfires have been a part of earth’s life cycle for millions of years, & many plants are adapted to them.  We saw tiny leaves of regrowth today in the burned area of the park.  Giant Sequoias, one of the oldest living organisms on earth, actually need fire to be able to drop their seeds (- firefighters are right now trying to save these ancient trees near Yosemite, & no doubt they’re doing it in a way that will help future propagation). Wildfires, like any burn, create huge amounts of carbon dioxide, however, & reduce the number of plants & trees available afterward to produce oxygen.  We live with the good & the bad of Fire.

Moving beyond Burning Man, daughter Z, grandson D & I were planning for the first time to go to the Strawberry Music Festival near Hetch Hetchy this coming Labor Day weekend. I’d already gotten out my old guitar (& I mean old…definitely antique at this point) to practice Gone for Good by the Shins (have no idea where I first heard this but love the tune, if not the words so much).  We found out a couple days ago that the festival was cancelled due to the Rim Fire, & that Camp Mather, where it’s held, is either within or immediately adjacent to the fire line.  Obviously, our small disappointment pales in comparison with the significant trauma of this disaster.  But it’s a lesson in how our future with rapid climate change will transpire:  trauma, lack of oxygen, stress, contaminated resources, disrupted energy, desolated landscapes.

Disappointment will be the least of it.

So (..always the question..), what can one do?  What can 7 billion do?  My latest (admittedly small & pathetic) effort is to carpool more often.  My friend Sue & I chatted the whole way to the Land Trust party Saturday evening (carpool to this?..uh, duh..) & it was totally fun; so: positive mental & emotional reinforcement for teeny tiny habit changes.  No, it won’t be enough to counter the inevitable tides of the Big Warming, but spending car time with friends & family is one way human primates will be able to survive these upheavals…at least, while we still blithely drive cars.

In the meantime, I hope you’ll support continued science-based management of our national forests.  And thank you firefighters near & far. 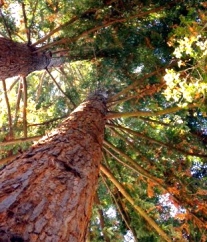 9 Responses to Burn3: Smoke in the Trees